As to reach the holiday house:

It takes 25 minutes from “Termini” railway Station until underground Station “Lepanto” (line “A”).

There are 400-500 metres from underground stop “Lepanto” to get to holiday house “Domi Aloisii” (it is possible to reach it on foot too or by bus n. 30, with only 1 stop and the same underground ticket).

It is possible to reach “Termini” railway Station from “Fiumicino” Airport by train or shuttle bus “Terravision”.

It is possible to arrive to “Termini” railway Station even from “Ciampino” Airport by shuttle bus “Terravision”.

It is necessary to reach the Grande Raccordo Anulare (G.R.A.), after exit “Flaminia” street, direction city centre of Rome.

It needs to drive along motorway “Flaminia” and, after few kilometers and going out on the right, there is almost immediately an underpass in a gallery which leads directly in via “Tor di Quinto”.

Continuing straight on there is, along via “Tor di Quinto”, an exit on the right which leads to “Tangenziale EST” – towards the “Olympic Stadium”.

Driving straight on again, after 2 galleries (whose second one is on the left) and running in “via dello Stadio Olimpico” (along by “Foro Italico” on the left and “Monte Mario” on the right), it is necessary to drive along “Lungotevere della Vittoria”, after “Lungotevere Guglielmo Oberdan” and, at last, “Piazza Monte Grappa”, immediately on the right. 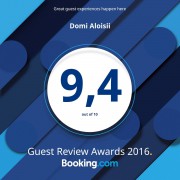